Play as a Runecaster in the battle-scarred realm of Zun! Magic runes from a long-forgotten war fill the land. You are one of few with the gift to control them. With skill and a little luck, you may turn the tide of battle.

Runes of Zun is a card-dueling game of magic and mayhem for 2-4 players. It’s easy to learn and draws inspiration from collectible card games and deck builders but without all the fuss of collecting.

Defeat all opponents by reducing their HP to 0 before they do the same to you!

The base game contains 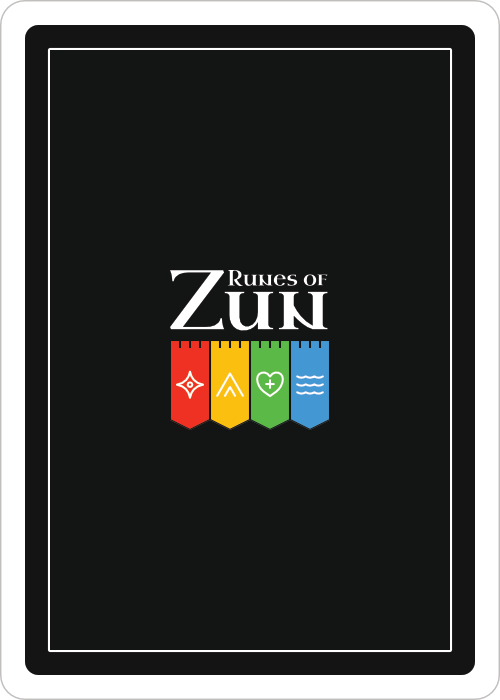 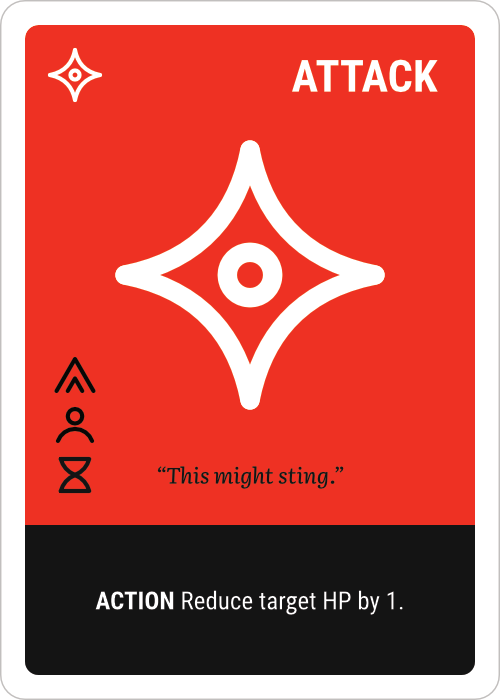 Rune cards are the cards that you use to play the game. They are what goes into the main deck, discard, and your hand. 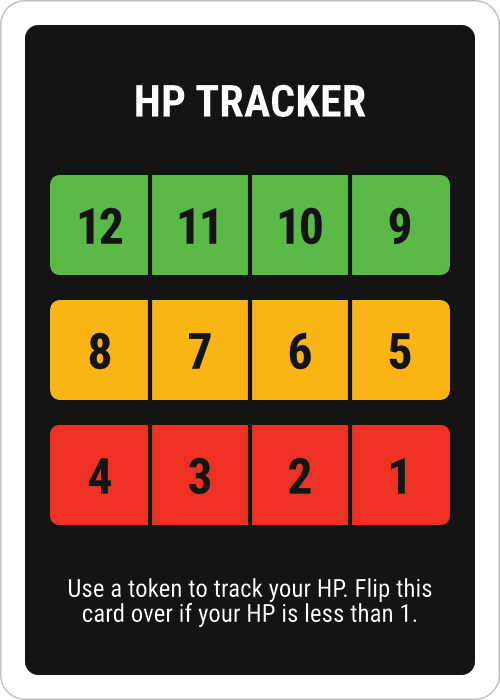 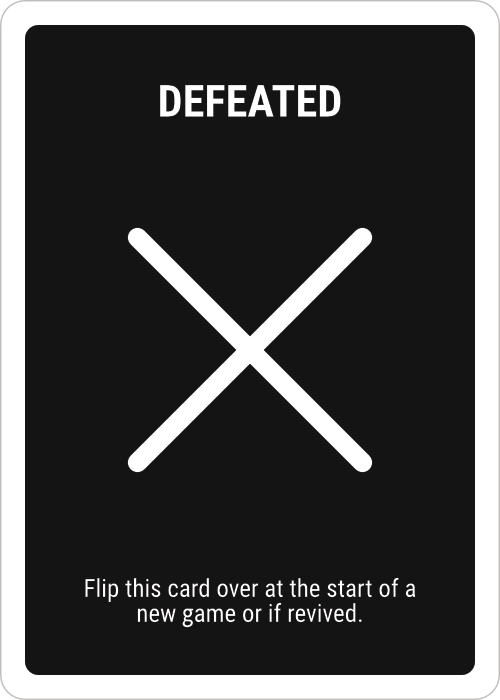 The HP Tracker uses the HP Tracker Card and a tracker of your choice (such as a coin or a token). Place the tracker on a number to mark your current HP. Flip the card over if you’re Defeated. 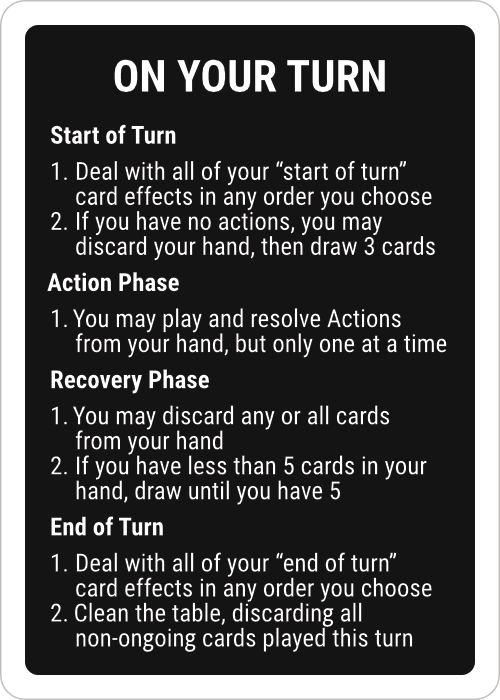 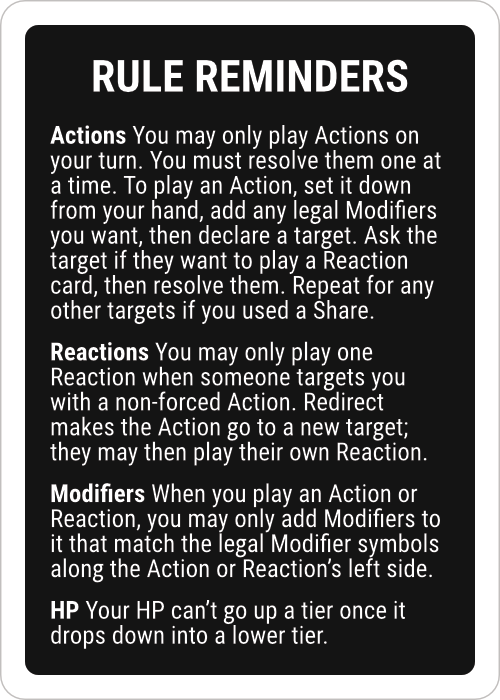 Each Reference Card has Turn Order on the front and important Reminders on the back.

Runes of Zun games can have up to 4 players. But with more HP Tracker Cards, you can play with up to 8 players or more! No matter how many players you choose, we recommend you have the right number of cards for a balanced game. You may want to start with the original 60 cards in the base game, then you can add or swap out cards from there using expansion cards.

You can play 2-4 players with the base game of 60 cards comfortably, or you can scale the number of cards to the number of players. About 40 + 10 cards per player should do the trick.

With more players, you may want to start with more cards than just the original 60 cards. Combining 2 base games may help, or you can add HP Tracker Card and expansions!

For larger teams, you may also want to use two identical decks, one for each team. This keeps the card distribution more stable.

But remember, build your deck how you like. Experiment! Since everyone is playing with the same cards, you won’t have to worry much about balance between players. Have fun with it!

Each turn has 4 phases

Your turn is over and the next player may now begin their turn.

Defeat all other players to win.

Defeat all other teams to win. A team is defeated when all players in that team are defeated.

Sometimes card effects and other rules clash. In that case, here are the levels of priority to decide which is more important.

Example: you have Defend and the Overdraw Rule triggers for you. The HP reduction from the Overdraw Rule will still happen even though Defend would otherwise prevent your HP from being reduced. This is because Overdraw is a higher priority than the card text for Defend. However, Defend will always prevent normal HP reductions due to its text explicitly stating that it prevents HP reductions.

Action cards affect players (even yourself). They’re what powers the game! 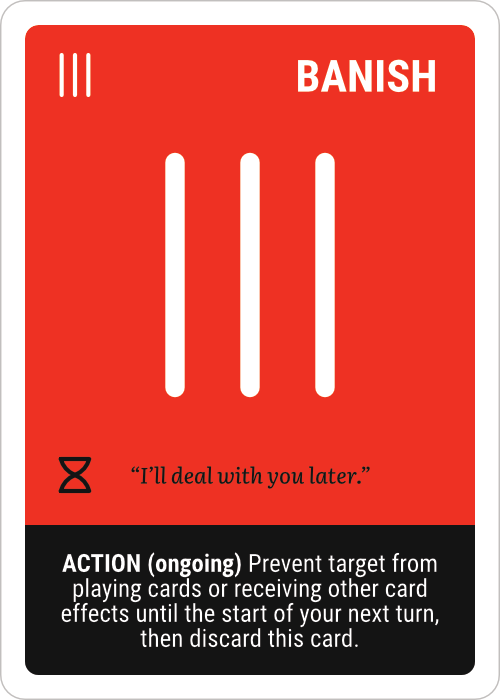 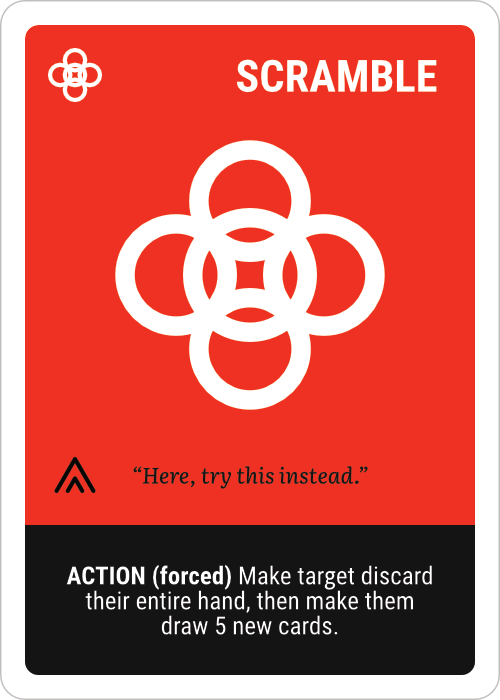 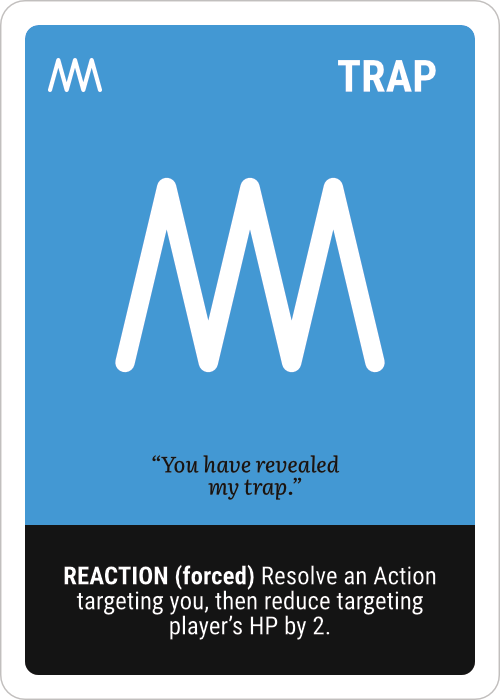 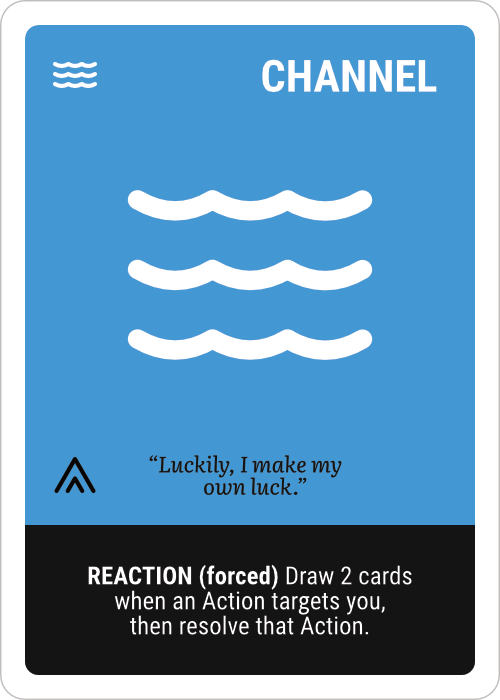 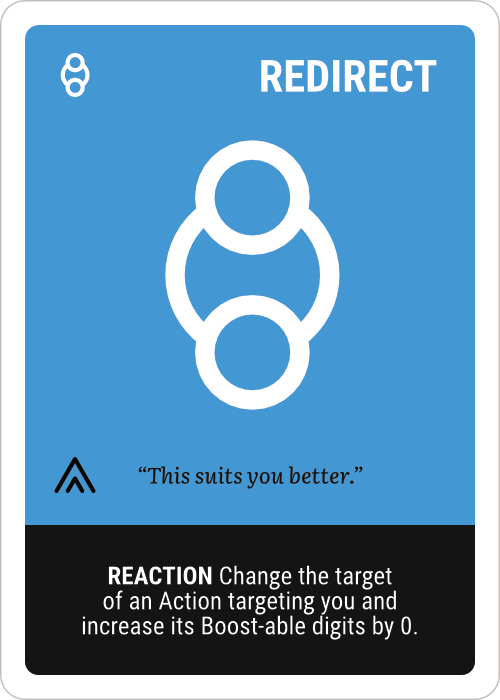 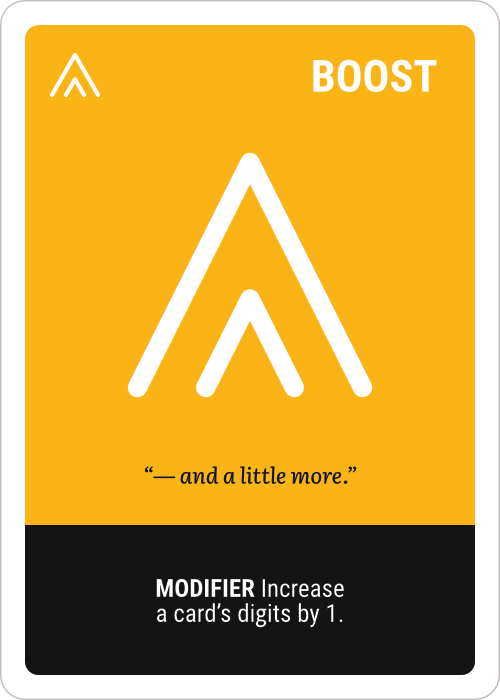 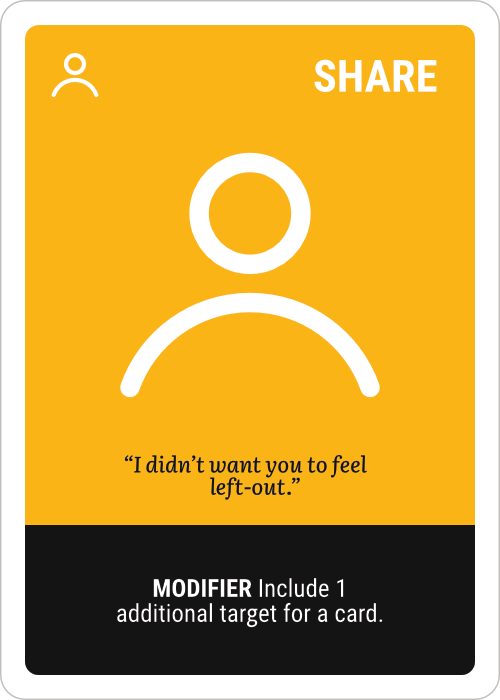 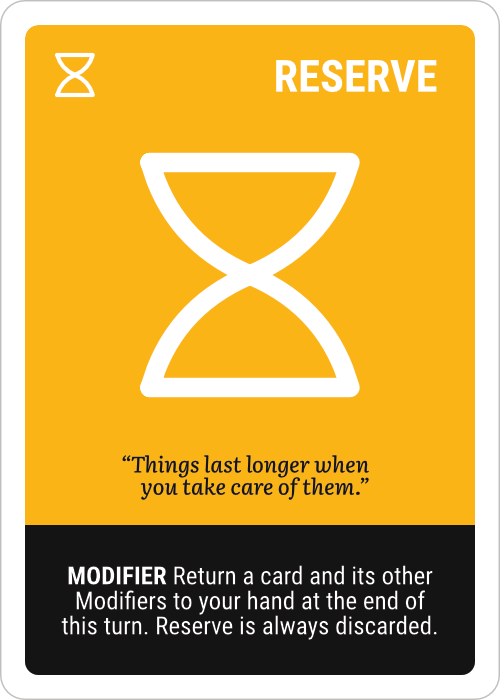 When you have 10 cards in your hand, you must reduce your HP by 1 for each additional card you place into your hand.

Example: you play Channel when someone plays Expose on you, but you still have 9 cards in your hand. When you draw 2, the 2nd cards makes your hand have 11, so you must reduce your HP by 1 for going over 10 cards by 1 card

When you are required to produce a card you don’t have in your hand, you must reduce your HP by 1 for each card you lack.

Example: someone plays a Steal on you but your hand is empty. You must reduce your HP by 1 for failing to produce 1 card from your hand

Example: you have 3 HP and play a Revive on yourself. You will only gain 1 HP instead of 2 because your HP is in the 1-4 HP (red-colored) tier.

All Players
Means that: 1) all players are affected; 2) no player is targeted; 3) no player may play a Reaction card because they aren’t being targeted
Action
A Rune card that does something to one or more players
Deck
A stack of Rune cards placed face-down on the table which players may Draw from during play
Defeated
When a player reaches 0 HP they’re out of the game (unless someone plays Revive to bring them back)
Discard
Remove a card from a hand, the deck, or the table and place it face-up in the Discard Pile
Discard Pile
A stack of face-up cards that have been discarded
Draw
Place a card from the top of the Deck into your hand
Forced
No Reaction cards may be played in response to this card
Ignore
Card effects take priority over whatever it tells you to ignore, including other cards with “ignore” in their text. This is now covered by the (immune) keyword, but means the exact same as (immune). Occurs only after the card succesfully resolves. Newer cards always win out over previously played “ignore” cards
Immune
Previously referred to as the text “This card ignores other card effects.” Means the exact same thing as such previously used “ignore” text. Reffers to when card effects ignore other card effects which may prevent their effect. Occurs only after the card succesfully resolves. Newer cards always win out over previously played (immune) cards
Modifier
A Rune card that enhances an Action or Reaction card
Ongoing
Card effects last beyond the turn it was played
Reaction
A Rune card that you may play when an Action targets you
Resolve
Activate an Action to make its effects happen or start to happen in the case of lasting cards that use the (ongoing) keyword or “until the end of the turn” text
Take
Place a card into your hand but not from the Deck (eg. when you Steal a card from another player)

The game is designed to be fun and playable even if you misunderstand a few things. But if you’re stuck and need help resolving specific questions, try these:

Join our Discord server or email our support team to ask rule questions or to voluteer your time to help others in the community, test future content, or contribute to the game’s development.

A game like this takes a lot of time and effort from dedicated people. As the game grows, so will this list.

Special thanks to our Testers, Backers, and Fans. Without you, none of this would be possible!